After we got moved to a room by the estuary at Los Palmas by the Sea, we began to routinely check the trees near our balcony to see what might be lurking in their boughs. This big guy greeted us on our first morning there. 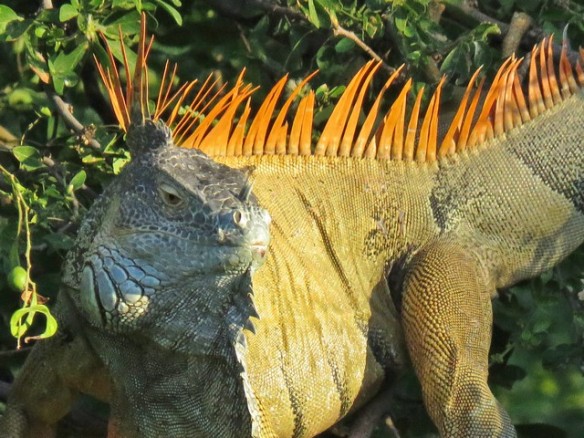 Midmorning, we took a taxi to the Zona Romantica. It cost 110 pesos for the cab compared to 20 pesos for two bus tickets, and in retrospect, we probably should’ve caught a bus. But after getting off at the wrong bus stop on our way to the marina, we didn’t want to waste any time or energy searching for Los Muertos Pier. 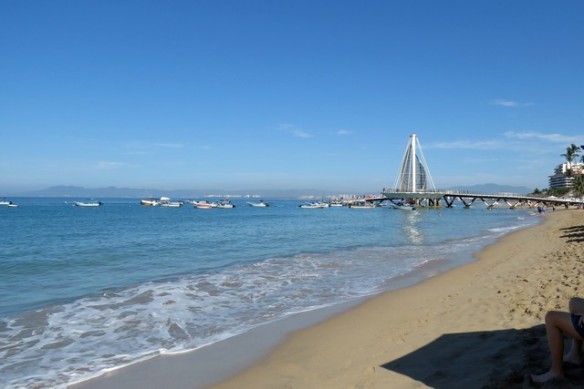 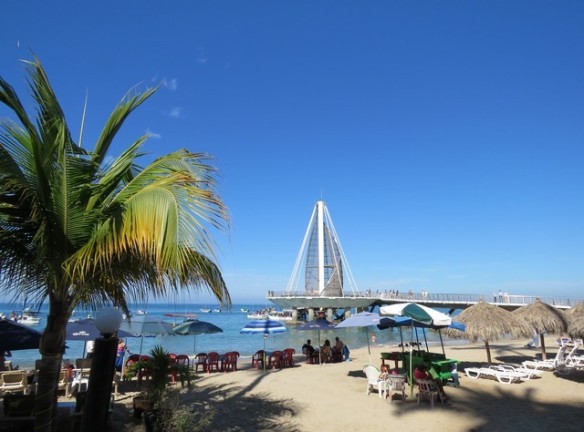 No matter which angle we took our photos from, it’s a great looking structure. 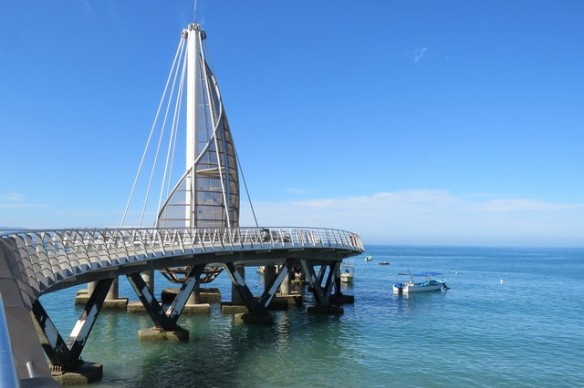 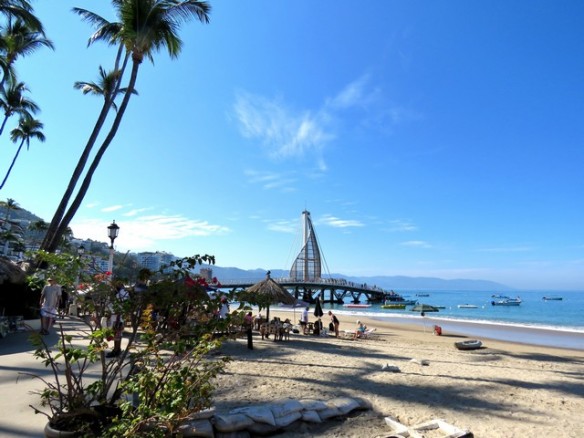 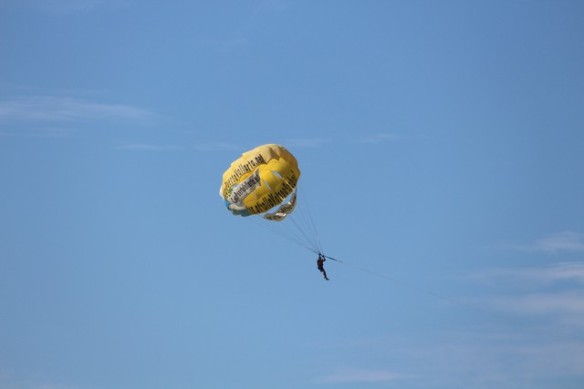 We dawdled on the pier for a while, relaxing in the shade and watching the pelicans’ antics. 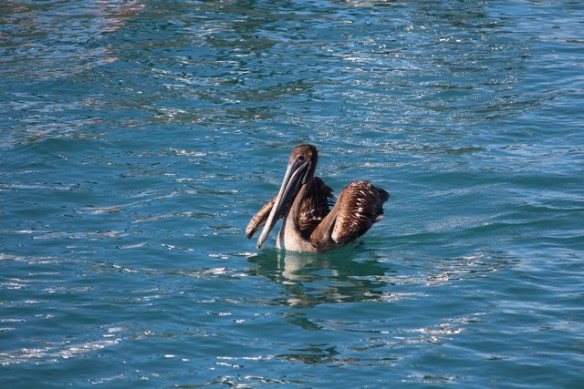 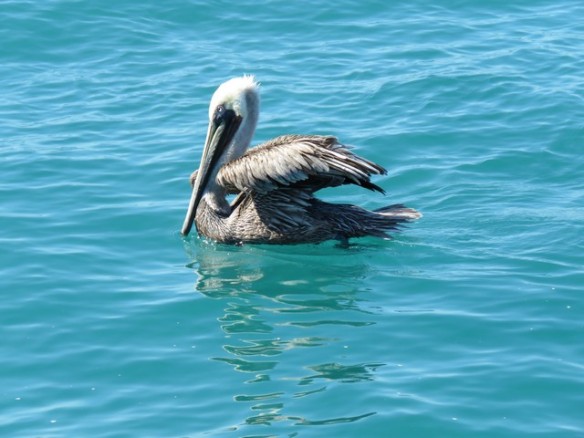 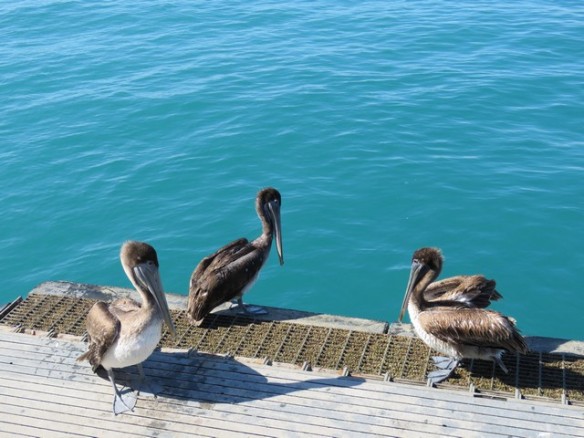 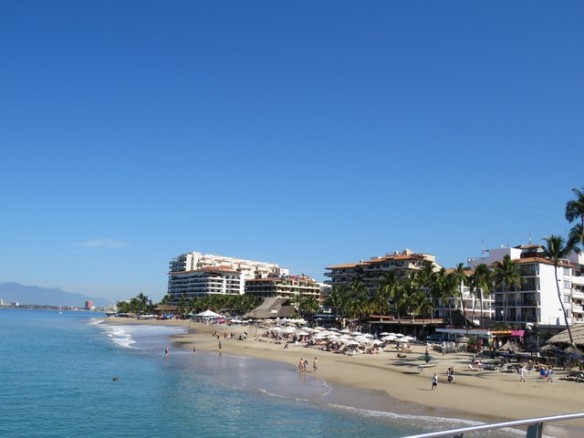 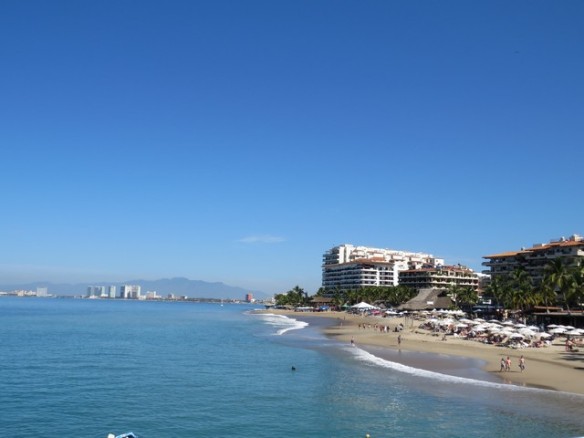 Lázaro Cárdenas Park is about a block east of the beach. I liked the cute tile art décor. 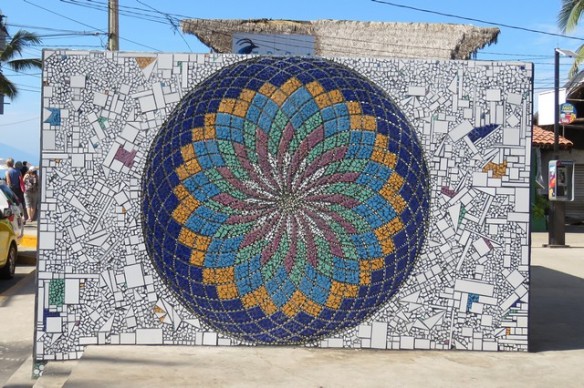 We explored parts of the mile-long Malecón on three separate days, and I’ll feature its numerous sculptures in another post. These are some of the other sights we saw that day. 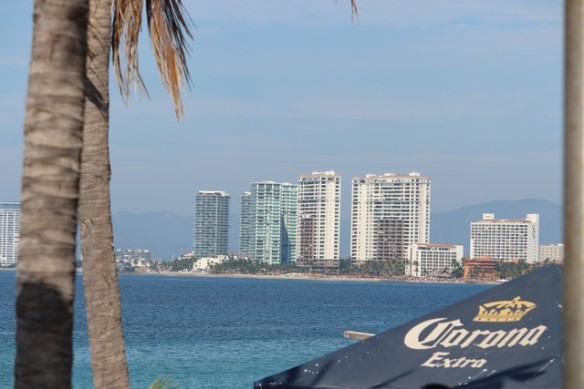 The Church of Our Lady of Guadalupe

The beach, along the Malecón, varies from sandy 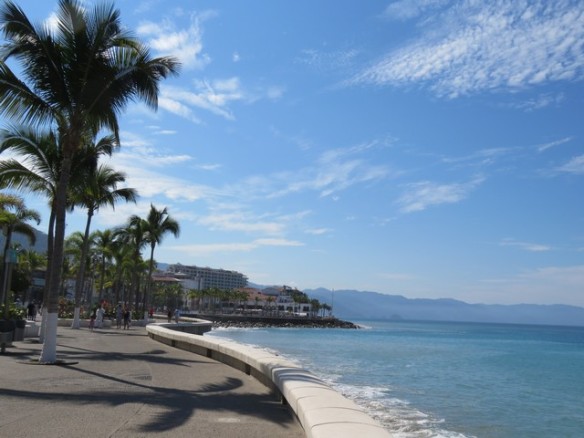 Rock art, on the beach

Looking south from the Malecón’s north-end.

The sign on Boulevard Francisco Medina Ascencio we used as reference to get off the bus.

Las Palmas by the Sea Resort on Calle Pablo Picasso.

Two parrots live in the entrance lobby at Las Palmas. 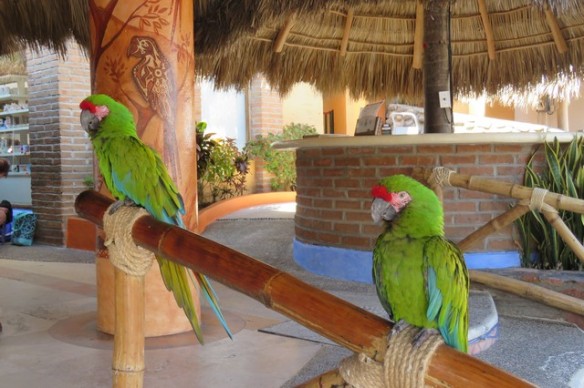 This one, the male I believe, is fairly nice.

This one, the female(?), is rather cranky. Muy malo (very bad), according to Antonio, the bellboy who minds them. One day Hubby walked near her while she was on the floor, and she quickly scuttled over to nip at his feet. Haha, the little brat. 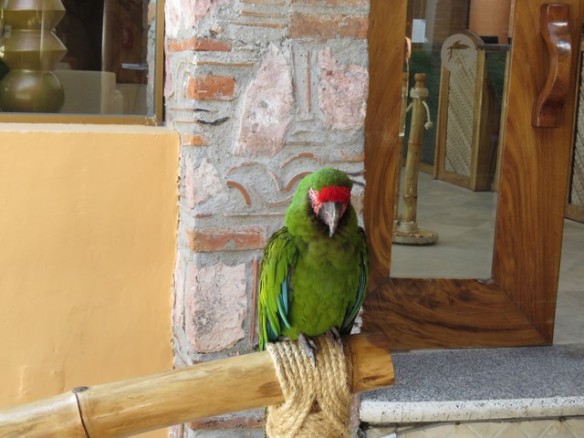 Towel art in our room. 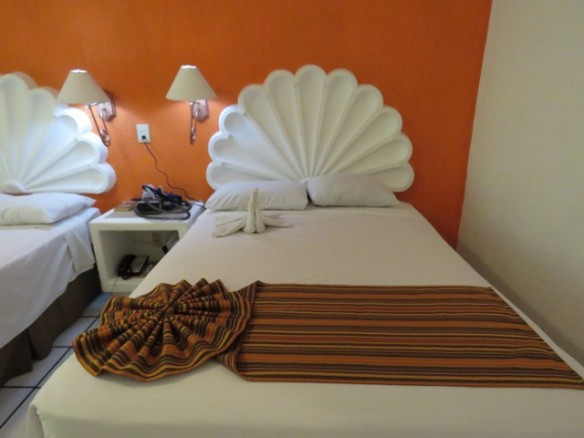 We had an excellent dinner at the Fusion a la carte that evening. (The two a la carte restaurants were far superior to the buffet.)

This delicious lemon chicken with fried plantains was my favourite meal of the trip.

I quite enjoyed the tiramisu dessert, too.

No sunset photos that evening. And no blurry entertainment photos either, for the second evening in a row. The previous night they’d held a surprisingly good karaoke session, and that night we listened to a fairly talented band. I even almost got Hubby up to dance. Almost.
Click here for my next post on our walking tour of old town. Start from the trip’s beginning here.

I continue today with more from our trip to California.

Sunday morning we left Roxy in Palm Desert with “Grandpa” while we set off for San Diego.  We’d been there once before and completely fell in love with the coastal areas, especially La Jolla (Pronounced La Hoya) and eagerly looked forward to renewing our acquaintance.

We opted for a shorter route than the one we took last time, reaching the Pacific Ocean at Dana Point.  The weather was mild and sunny, and we meandered slowly through all the coastal towns, preferring to take the quiet coastal roads rather than I5 whenever possible.  We stopped for lunch in Oceanside and happened upon a popular spot called Breakfast Club Diner.

It opened at noon and a line-up formed quickly, so we were fortunate to find seats right away.  It was a funky place, very west coast surfer, and the food was abundant and tasty.  I’ve never seen such a huge burger as the one Hubby ordered.  He left feeling confident it would hold him for many hours to come.

We arrived in San Diego around 2:00 and made La Jolla our first stop.  La Jolla is so gorgeous and this is by far my favourite area.  We started our walk at Casa Beach.  The harbor seals have taken over the cove which was initially intended as a children’s pool.  Not everyone is happy about this, but it’s my thoughts that there’s plenty of beaches to go around, let the seals have this little protected area, especially during pupping season.

This tiny pup was born that very day.

A little farther up the path is Seal Rock, where the sun-loving sea lions have their off-shore reserve.  It’s amazing to watch these sea lions wiggle around and sun bathe on this very tall rock.

One sea lion in particular, as you can see in the far right on this photo, teetered on the very edge, and terrified that it’d fall off right before my eyes, I had to move on.

This brought us to a part of the path we’d never taken and I had no idea, last time I was here, such a large number of sea lions congregated in the area.  Pelicans and cormorants also have colonies here, making it an entertaining feast for the eye (not to mention an interesting aroma for the nose).

The last time we were in San Diego, I spotted a huge cave while on the City Tour bus.  We weren’t able to go back and see it for ourselves so it was high on my must-sees this time.  There are actually six ocean-carved caves in this rock, all accessible from the water, only one from land.  Snorkelling around the caves is a popular activity and I wish I was brave enough to try it. 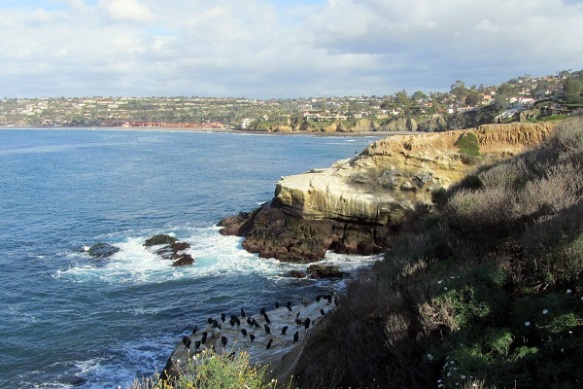 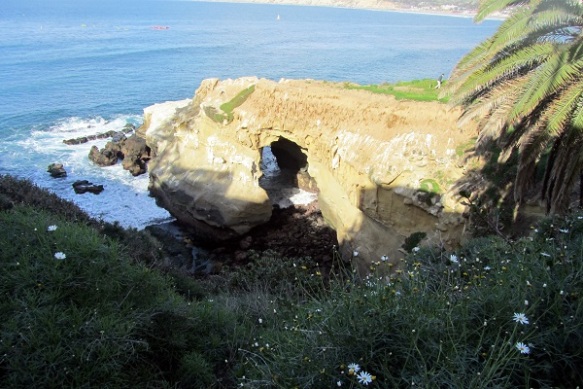 Access to the cave is through Sunny Jim’s gift shop.  We paid our $8.00 and began our descent.  I had no problem with the 145 steps, but I did struggle a little with the change in lighting from the brilliant sunshine outside.  My depth-perception disappears in low-light situations and a few times I worried about my footing going down. 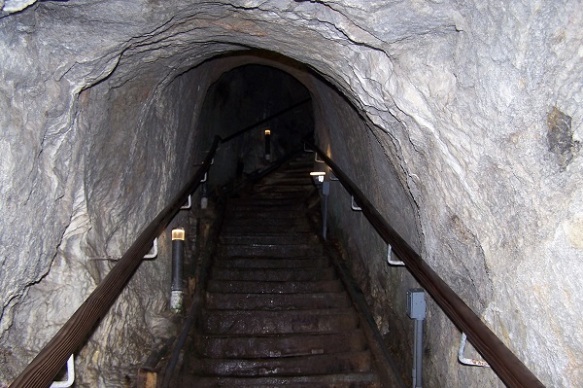 Arrival at the cave was a little anti-climatic.  For safety reasons, the ceiling had been shotcrete to prevent rocks from falling on people.  I understand the reason, but it really took away from the authenticity of the cave. 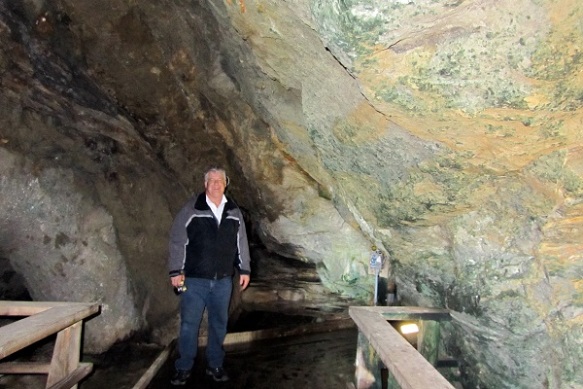 The view of the water was pretty enough, but people had left their mark with garbage and graffiti, which was a real shame.

I wonder if this was an actual proposal?  And if she said yes after he went through all that work defacing a public railing to ask her? 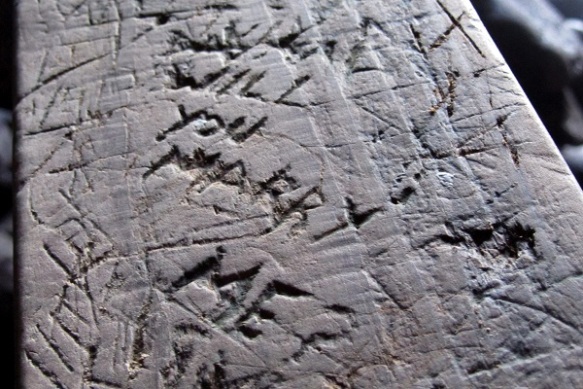 The 145 steps back up were much easier than the descent, I guess my eyes had adjusted to the lower lighting.

Back out in the sunshine, we reversed our steps to return to our vehicle.  Amazing what you see in the same spot from a different perspective.  We’d completely bypassed this other small cave on the beach when we went by it earlier.  That’s me down there in the pink coat.

The rocks were too slippery for me to negotiate and I had no intention of turning an ankle my first day there, so I had to be content to view it from the outside and take some pictures of the sun-tanning pelicans.

Our hotel, the Best Western Island Palms, was a pleasant surprise.  We loved the location, with the marina on one side and San Diego Bay on the other.  The room was more than adequate for our needs, with a king-size bed, a mini-fridge and microwave.  And we really liked all the counter space and the large shower in the bathroom.  (And the best part is it was free, booked with airmiles) 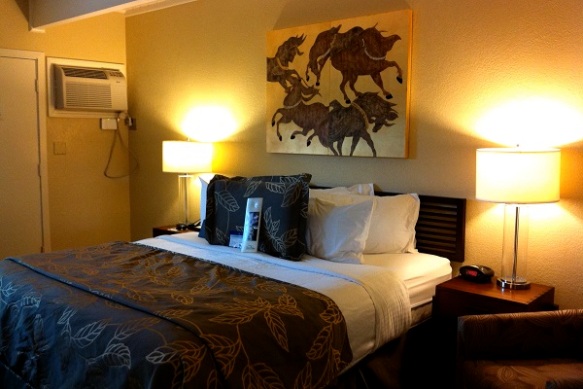 After quickly settling in, we explored the area, walking the length of the marina, then crossing over and walking back up the Bay side. 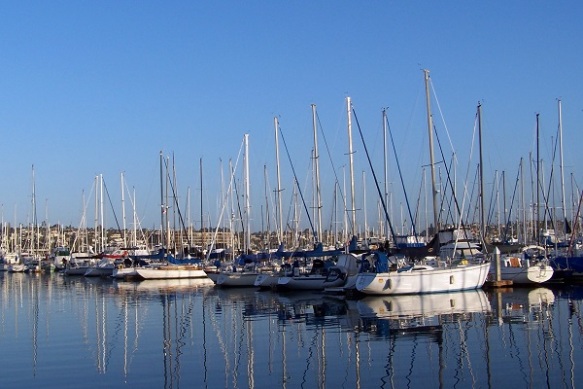 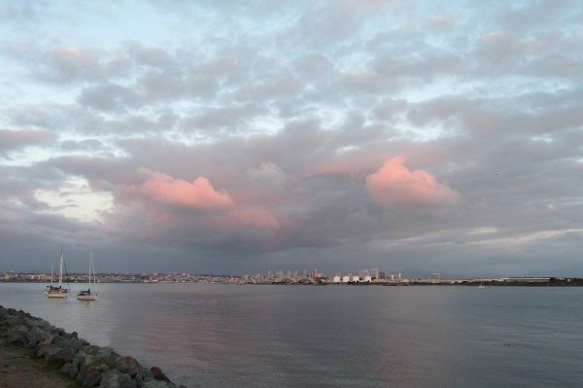 There were the most interesting flowers blooming, I don’t know what they were, but I really liked them.

Hubby was happy to be so close to the naval base with the opportunity to see some aircraft. 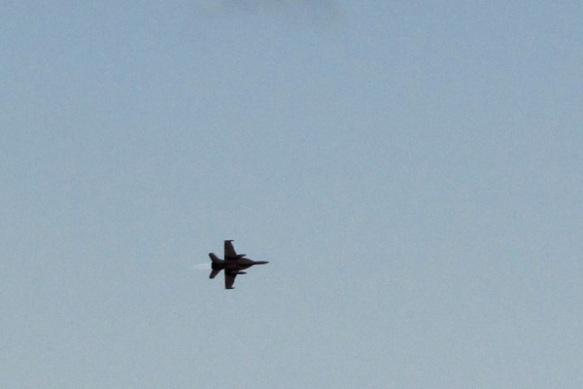 We ended the evening with 2 for 1 appies in the hotel bar (still stuffed from lunch) and after a very full day, we hit the pillows early.  Sea World awaited us in the morning!!